Ah the heat ... The underarms that stink, the panty that sticks, this feeling of suffocation in an overheated room ... What happiness. But since good things should not be overused, we have found a simple and effective way for you to cool off: a fan connected without blade !

But above all, why a bladeless fan ? Because the latter will allow a more stable air flow than that of the paddle fans, which themselves will stir the air. Thanks to this, the air will not tend to be warmed up (you know that the heat comes from the movement of course), although it is quite relative as felt. There is also a safety aspect to prevent children from putting their fingers at the level of the "Blades", as they are called in English. But there are still some blades, they are just in the body of the fan, and thanks to this the air flow will be directed so as to come out through the periphery of the blast zone. And thanks to this, they are normally less noisy and the feeling of air is greater at equivalent power (the air is pulsed).

There are few on the market and of varying quality. Our choice fell on the brand Earthsmart, famous for offering out of the ordinary products at an excellent price / quality ratio. Will this be the case with this wireless fan, which also doubles as a nightlight, for a price of 34 €? 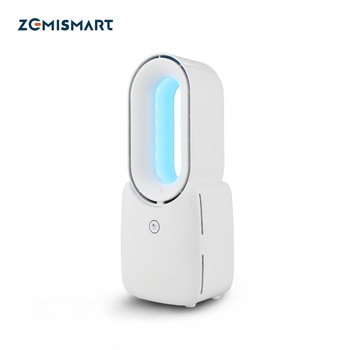 Earthsmart : a fan connected without a blade for Smart Life

Contrary to the usual brand, the fan is delivered in a blue-green over-cardboard, written in Chinese, very thick. Inside is the packaging of our product in thinner, glossy cartons, with a visual of the bladeless fan, always written in Chinese. But between the two is slipped a notice in English, more or less clear. So one thing's for sure, it's not Earthsmart who manufactures this product. Let's not anticipate, but in general the quality is below what the brand usually does.

Inside, well glued in foamy slices, there is the fan connected without blade, for an micro-USB cable and Chinese leaflet. We pass quickly on the latter that we found a little too succinct. Moreover, the one in English is not left out because it does not really say how to bring the equipment into pairing mode.

The connected fan is 30 cm high, 12,5 cm wide et 9 cm thick for almost 590 grams. Not big therefore for a product of this type, which suggests average performance. But it has the advantage of being mobile because it runs on battery. The materials are of average quality, both outside and inside (hub blades, etc.).

The air will come to be sucked in by the rear of the fan and then directed towards the outlet holes on the periphery of the expulsion zone. This will react as a buffer zone and generate a less disturbed air flow than with blades. But the power is going to come from the speed and size of the inner "propellers". You can imagine that it's not going to be a Dyson.

So let's look at the features:

Note that during this test, theThe fan was not working when unpacking. Which is quite annoying and frustrating. But since we are on a test, and we don't necessarily have the threat of a warranty that won't work, we opened it up to see what was wrong ... Having unzipped and replaced them. lugs, then manipulated the printed circuit, was enough to make it work. But this is a fairly average introduction, it must be admitted. It is noted that for the first use, it must be unlocked by pressing the button 4 times ...

In short, once this was repaired, we were able to take advantage of the strengths of this product, thanks to its 2 touch buttons:

The colors are quite successful and well marked, even if the light cycle remains our favorite. Likewise, the breeze is quite nice, the fact of having a fluctuating air flow allowing to feel from time to time a small peak of "Freshness". But let's be frank, from 2 meters, even at maximum power, we do not feel much. It really is a desktop device.

And in this case, pay attention to the volume. At 1 meter, we have 55 to 58 dB at maximum speed. It is not huge, but it corresponds to a window open to the street. A little annoying by force. At 50 cm, it is more than 60 dB. There, we arrive at the threshold of hearing fatigue. At its lowest, we are at more than 40 dB, the recommended limit for a quality night.

Count more than 2 hours for a full charge for cordless use of approximately 1 hour 30 grand max at maximum power and with Wi-Fi (the fan will turn off at 1:05). The function button will flash red 3 times before turning off the fan and you can turn it on again, but the Wi-Fi will no longer work. A little stingy then.

It's all well and good, but you surely want to use it in a connected version, right? Let's go.

You will need to use Smart Life to drive this fan. Pairing mode is unclear. It says in the documentation to do an automatic search ... which does not work.

Here is the method we found: press the "+" at the top right, then choose " small electrical appliances and fans'. And there, we are asked to flash it. What we tried, but without success… No wonder because keeping the function button pressed starts the simulation of natural wind… We have, by default, left the fan on and proceeded with the installation. Who worked! Even if at the end, it seems that the initialization had some misfires. However, the Zemi connected fansmart appears well in connected devices and is controllable by going over it. So no problem.

In the device settings, you can rename your fan (something that was not proposed before due to the initialization bug) and then come and control it via 3 inputs:

You also have the possibility of integrating it into routines to turn it on at certain times or when the temperature becomes too high, via a scenario. It's pretty good in principle.

Finally, this use with Smart Life does the strict minimum (light and power) but does not go beyond what is physically possible with the fan. It even does less since it is not possible to define a light cycle.

Le Zemi connected fansmart will go up alone on the 2 assistants as a fan, but not the associated lamp, which is however generally the case with devices with multiple functions. So that means that you will only be able to vary the fan speed and not the colors. So you have Smart Life… or your finger.

In L'application Alexa, the fan has no less than 26 vitesses… Strange for a product which has 3 in practice. But in the end, asking for a speed like this « Alexa, turn on the fan at 15 " or "at 20" will not change much because each announcement will increase by one level.

Sous Google Home, it's easier, no speed is available. So in this case, how to change them? It is not that simple but it is possible.

Indeed, under Google Assistant, but also under Alexa, you will have to ask "Turn on the fan" to switch it on or change the speed by a value. That is, by asking it once, you will turn on the fan. A second time, you will switch to speed 1. A third time, to speed 2… And to turn it off? Well it must be said "Turn on the fan" a 4th time because the sentence "Turn off the fan" is not recognized! It's impractical and totally ubiquitous (Ubu Roi, you know?).

This can be understood through the operation of Smart Life and bladeless fan. If you press the virtual button, it will turn on and turn off after a while. There is therefore no real ON status with the touch button of the fan, which will operate under pressure. The same goes for voice operation. It's too bad.

So indeed, you always have the possibility to create a scenario under Smart Life to turn it off by requesting the activation of this automation, but the use is still tedious, especially with Google Assistant.

You can see this on our video:

Tuya Smart Bladeless Fan with Colorful Night Light Alexa Google fan without ...
€33,37
€56,57
Not available
Buy
AliExpress
In conclusion of this test, it is partly the disappointment that points. Indeed, Zemismart is never as good as when she herself is the originator of the products, which is not the case here. And it shows. Even if this fan connected without blade is steeped in good intentions with its battery operation, the fact of having an integrated light with 6 different colors and 3 speeds plus the simulation of natural wind, we quickly get around it. Indeed, the battery lasts a short time, he is quite noisy for the size, its use via Smart Life is limited and its use by connected assistants is incomplete. One of the rare cases where the quality / price ratio is not really at the rendezvous at Zemismart...

Available on AliExpress
Tags Amazon Alexa Google Home Assistant Tuya Smart Life Fan connected Fan without blade
Jean-Christophe July 28, 2020
Jean-Christophe
More
Did i choose Alexa or did she choose me? Let's say that as a beta tester, it's a bit of both! And I do not regret having met our favorite assistant nor this adventure undertaken with Alexien Modo. Technophile, self-taught and loving popularization, I try to make our common passion easy to access!