Who says new pregnant Amazon Alexa, says new accessories available to improve, customize or beautify your device. We recently tested the support for Echo Dot 3 Babacom who had done pretty well. We are therefore continuing with a new non-technological accessory that can be used with electronics Amazon Echo, new speaker requires: Echo Show support!

Designed specifically for 2nd generation Echo Show, this support has the merit of being produced directly for Amazon and to be in the cheapest (even if everything is relative) and the most design.

By going for a walk on the different media for Show 2, we can only be disappointed with the offer: limited, it goes from ugly to hideous and from expensive to totally absurd. Surely due to the fact that Show 2 has just been released in France. Despite everything, there are products coming out of the lot, and this support Amazon is part of.

The interest of this is precisely that it is directly provided by Amazon. It is therefore an official product and from there we are pretty confident about its quality. But the question you are probably asking yourself (if, if, we know you) is: what is the point of a support for a Show 2? The main reason is that, like the spot, Show 2 is static. And with a screen, we would like to be able to change its inclination for better vision or even for video calls in order to be well in the frame, depending on its positioning.

The support is delivered in a box containing the color codes ofAmazon, fairly well made. We find there the support (in one piece), a plastic key for assembly et the instructions quite well done (very illustrated).

He does 24,5 cm wide, 12 deep et 3,5 high. In principle, once mounted, it does not protrude from the Echo and does not take up more space on the ground than the bare device (in relation to its maximum size in relation to the surface in contact with the ground). It is in fact made up of 2 parts already assembled : an upper part on which the show 2 will be fixed and a lower part which is the foot of the support. The two parts are articulated with respect to each other on a horizontal axis. So effectively, your Show 2 will be able to nod but not turn sideways.

On the upper part, we will find two small plastic pins that will fit into Show 2, as well as the famous smile ofAmazon (official product requires). On the lower part, we have the key insertion locations (on the underside of the upper part) as well as a Revêtement en caoutchouc over the entire surface of the foot with strategically placed pins. This is to prevent the media from sliding off easily. The grip is very good.

Regarding the plastic of the support, we are using a hollow frame for the foot, mat black (white does not exist, which is a shame, but it goes well with the white Show 2) and resistant. He is both rigid and flexible enough not to break if you press a little too hard while changing the inclination of the device. However, we can wonder about its robustness, its lifespan, the plastic also does not seem of exceptional quality for the price...

Installation and use of the Echo Show booth

The installation is very simple:

There you go, 15 seconds and it's good. Extremely simple. This medium is really interesting to use. Indeed, as we announced at the beginning of the article, your Show will now be able to be tilted or raised according to your desires. In writing, we use the Show extensively for video calls and it is frankly a real asset to be able to modify the positioning of the camera depending on the brightness or our installation. The final rendering is also very good, the medium not distorting the whole which becomes relatively coherent for once. What's more, the Show is really well secured on its base, cannot be accidentally detached.

The incline is relatively interesting. It is possible in the lowest position to touch the support foot from the bottom of the spot. The screen is therefore found at 90 ° relative to the surface on which it is placed. Conversely, reversed to the maximum, the bottom of the Show touches the back of the support foot. The screen is approximately 50 ° rearward from the surface.

What about the sound? Indeed, the fact of raising an enclosure has the result of allowing a better sound propagation because the waves can also be reflected on the surface under the Show and therefore have more body. However, let's face it, we're only 3,5cm tall and the gain is really minimal. The Show also has a very good sound, so you can hardly hear it.

Adjustable support for Echo Show (2nd generation - 2018)
Not available
June 29, 2022 11:02 a.m.
Shop now
Amazon. Fr
Updated: June 29, 2022 11:02 a.m.
In conclusion, this support is very practical and smart enough for two reasons: it allows you to change the inclination of your Show at will for better visibility in all circumstances (daily visibility or even video calls) but also, once set up, very good security and good aesthetics from the whole. On the other hand, it is a shame that only a black version is available. We can also only ask ourselves the question of such a price (30 €) for a simple plastic accessory of a quality which although good is not exceptional. And this is its biggest flaw. 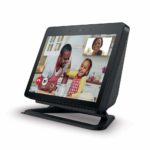 Available on Amazon. Fr
Tags Alexa Amazon Alexa Amazon Echo Echo Show 2 Echo Show Support Echo Show 2 Support Swivel support Test Amazon Echo show 2
Jean-Christophe April 17th
Jean-Christophe
More
Did i choose Alexa or did she choose me? Let's say that as a beta tester, it's a bit of both! And I do not regret having met our favorite assistant nor this adventure undertaken with Alexien Modo. Technophile, self-taught and loving popularization, I try to make our common passion easy to access!