In line with our tests on the connected switches that you are fond of, the Alexians have found a switch that is on fire, the Lora Tap. Why this choice ? Because it is a product that is often promoted on Amazon and we wanted to test it. If it is possible to have a quality product for less than 18 € in promotion, we go for it!

LoraTap's unique model is FR model (it seems), CE and FCC standards (US). In theory, it seems very close to Teekar switches, which are good products: close / open / pause modes, works with Smart Life, tactile and almost its twin brother at the visual level… Let's see together if this is really the case.

The switch is delivered in a box reminiscent of handmade : it is brown, it is small, it is ugly, the stickers are not really well stuck and… it is scribbled with a ballpoint pen: FR has been added and an item has been manually deleted. Good… We leave with a serious doubt, but we have already seen fairly basic packaging with good products. However, as a consumer, we have doubts about the quality. But do not let ourselves be influenced ...

What do we find in it? The switch, four screws, a small screwdriver, a Wago 3 inputs, a piece of blue wire and a quick installation guide in French.

Design level, we are on a beautiful product but almost identical to the other connected switches. The front of the switch is in 4mm tempered glass with a white background, three pressure zones. It's refined, it's sober, it's pretty but it really feels White mark : no identification, no enhancement. The three buttons are open / pause / close the curtains. The dimensions are fairly standard for the front (8,6 cm per side) and a depth of 2,5 cm for the transplanting system. Once set up and well glued to the wall, count a small centimeter of thickness. So identical to the others.

The thread transplanting block is completely standard size and adapts without any problem to the placo boxes of the French market. A little more, once the front has been removed, there are not two holes on the sides of the internal face, but 4 holes allowing it to be screwed into the flush-mounting box without any problem on all types of boxes and in any meaning.

LoraTap: An installation that fires all the woods 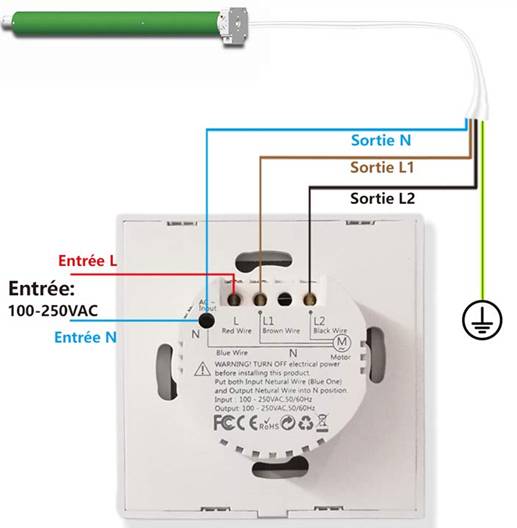 Regarding the installation, the diagram is relatively simple and identical to what we have for the other switches, just a few things ready. But we see some rather annoying details from the start ... We will not come back to the spring system which can eventually generate random pulses and open and close the shutters without special requests. The most annoying is the location to come and put the neutrals ...

As you can see, it is not at the same distance as for phases and returns which are about 0,5 cm. There, we are at a depth of more than 1 cm to come and put the neutrals. It is not possible, in fact, to put only one wire and not two unlike the instructions ... So immediately, we better understand the why of the Wago and the piece of wire. But the other point is that this wire is precisely stripped over more than 1 centimeter and relatively flexible ... Another fact, once the cover has been removed, the electronic system seems much more summary than what we find on brands already tested. So even if the facade looks identical to other brands, the connection system, on-board electronics and others are different… And doesn't really inspire confidence.

Either… We will therefore use the Wago and the wire because they must be used for that, but the instructions do not mention it. First problem, where to place this Wago which is quite bulky and which will take up space in the block? We'll think about that later ... Or not. But let's make the connections. This is good because the colors are noted on the connection block. All the threads are put on well, except the neutral, very malleable and it is almost impossible to know if it is too much or not enough ... After fixing, it holds, so it must be enough.

Once this is done, it is necessary to put the current back on and to test… and there, no glow on the switch. Either… Maybe there isn't? Let's do a test by trying to press the spring to raise the shutter and ... BAAAM! A noise of explosion, a shower of fire and the pellets which jump ... You can see the result in the photos below… But what happened?

Several possibilities, but the main problem comes from the neutral connection system. It is absolutely abnormal not to have almost direct access to the screws when inserting the wires. From there it is necessary to use a wire (provided in this case) and haphazardly screw in luck.

If it is not inserted enough, it will be able to move and make electric arcs and potentially short circuits and sparks, hence a risk.
If it is pushed too far in, it will potentially be able to touch the circuits and other welds, cause a short circuit and therefore sparks, destruction of certain elements and the consequences that go with it.
If you look closely, unlike the other montages, neutral and phase arrivals are side by side while in general, they are as far apart as possible. It is not impossible that by pushing the neutral wire too far, it will touch the phase and… badaboum.

The other possibility is the nature of the wire supplied : too flexible and thus potentially unable to withstand the intensity arriving and leaving the neutral wires, and in particular that of the circuit. To this is added too much stripping (we do not exceed 5 mm). It is also possible to be on a mixture of two problems ... But looking at the photo of the piece of wire provided, it is clear that the problem comes from this area. It is also possible that it is simply defective, but looking on the net, This is not an isolated case.

As much to say to you that the test stopped here. But wait, we can hear you from here! “Yes, you have tested a cheap product that is not NF! And if it is, it is false CE !! You have to be careful, it's well done !!! ".

So let's be clear, most of the people saying these trivialities don't know what NF or CE standards, buy without looking, and would be surprised to go around their installation and see what is not NF… The first point that is always important to remember.

Another thing, the aim of the Alexians tests is to put yourself in the consumer's shoes everyday, buying online, not having precise technical knowledge and installing the products as stipulated in the instructions. It would have been possible to put a more rigid cable, less stripped, but who would have done it in reality? We therefore test as foreseen by the manufacturer using what is provided, to be representative of the average handyman.

What does this test tell us:

In the end, this connected switch for roller shutters is a product that we can qualify as dangerous. Problem during assembly? It was followed to the letter with the material provided. Problem with the materials? Those supplied were used. A manufacturing defect? Even if it is, it is not acceptable. The rating is 0/10. Contacted beforehand by the Alexians, LoraTap had announced to work on a new generation and had not wanted to make a partnership with us to test this one… Strange… 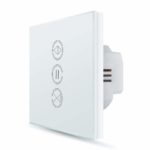 Available on Amazon. Fr
Tags Alexa Amazon Alexa Amazon Echo Automation Connected switch Lora Tap roller shutters
Jean-Christophe March 21, 2019
Jean-Christophe
More
Did i choose Alexa or did she choose me? Let's say that as a beta tester, it's a bit of both! And I do not regret having met our favorite assistant nor this adventure undertaken with Alexien Modo. Technophile, self-taught and loving popularization, I try to make our common passion easy to access!