According to an Arabic proverb, "The wait is harder to bear than the fire", but at Amazon it's rather "The Fire is well worth the wait". Yeah, the least we can say is that we've been waiting for this Fire TV Cube ! Arrived in France at the turn of a Amazon Devices Event which almost eclipsed its release, we have since examined it from all angles in order to give you our feelings on this streaming box so promising on paper ...

Although compact, the box is far from empty and it weighs! This is the first surprise: the packaging is really heavy and very complete since the device is delivered with a remote control Alexa, for an Ethernet adapter, for an infrared extension module, two AAA batteries and the essential AC adapter. All that's missing is the HDMI cable, which is a bit of a shame, if not stingy. Too bad.

Not really cubic since it measures 7.6 x 8.6 x 8.6 cm, the Fire TV Cube surprises not its compactness but above all, once again, by its weight. The beast displays all the same 465 grams, which augurs well for a much more complete hardware than that of its counterparts in stick format.

La 3.8 x 14.2 cm remote control is the one we already know with its button Alexa which will not be of crazy use since the Fire TV Cube has its own microphones. The feed, on the other hand, is much larger and of the same size as that of Amazon Echo second generation.

Although the glossy coating is particularly sensitive to fingerprints, the finishes are impeccable and make it a rather aesthetic object, the streaming boxes are generally quite ugly. At Les Alexiens, we like it a lot, because it goes perfectly with our audiovisual devices. It even aroused the curiosity of our guests this weekend ("Ah, that's cool, don't you have one too many?" "). In short, unlike many other devices, we do not want to hide it and everyone agrees that it is rather cute in its kind!

The top benefits from a matt treatment, much less sensitive to fingerprints, presenting 8 holes for as many microphones accompanied by 4 buttons (volume +/-, mute of microphones and action button). Finally, we find a LED border on the front which lights up like an Echo when one invokes Alexa... When the assistant "thinks", it is not unlike that of a famous car, it's nice. A Xennial dream come true!

At the rear, the connection is simple, but effective: a power port, for an HDMI, for an infrared port for the extender mentioned above and, this is surely the most interesting, a micro-USB port which is useful for something! Indeed, this one is not dedicated to the power supply, but to the network connection via the10/100 Ethernet adapter supplied. Adapter which also has a micro-USB socket that should be of interest to users of external drives.

The streaming box ofAmazon contains interesting hardware because really powerful. Apart from the Nvidia Shield, difficult to find better on the market today ... Even less with compatibility Alexa !

On the audio side, the Fire TV Cube supports systems audio 7.1 and displays the certification Dolby Atmos up to 48 kHz on 8 16-bit channels. Although we do not have the explanation, we have found better quality than with Fire TV Sitck 4K in music reading on Amazon HD Music. Indeed, in association with home cinema with two Echo Studio, we were able to note that the DAC of the latter takes care of the decoding of the stream in 24-bits at 48kHz, that is to say just above what is capable of the human ear. Because yes, we will come back to it in an article devoted to the subject soon, but no need to ask for more, because even brilliant musicians with perfect pitch are unable to make a difference beyond that. Beh yes! ^^

After three weeks of testing and long hours spent in our sofa, here is our Fire TV Cube review.

Installation is as easy as ever and takes around 5 minutes. No need to open an app, just plug in your Fire TV Cube, take your remote control in hand, and follow the instructions. If, in addition, you bought it from Amazon, it will already be linked to your account, making the installation process even faster.

Although we have already explained to you how create a Home Cinema with your speakers Amazon Echo, we will quickly explain how to do this:

Fire TV Cube is currently hosted by the Fire TV version 7.2.1.6, or a more recent version than the one available on the Fire TV Stick at the time of this test. This results in some sustained differences, not to say imperceptible, but clearly an advance for this device which benefits from an equally recent version of Android (Android 9 vs. 7.1).

As you can see from the screenshots above, all major services are available: Prime Video, Netflix, Disney +, YouTube or Plex. You can also use an external or network drive using the supplied adapter. At a time when the use is mainly focused on streaming, it may seem a bit anachronistic, but many users make use of it as evidenced by the many posts on this subject on our website. Facebook group dedicated to Alexa. It is indeed possible to play MPEG4 and H.263 streams in 1080p, as well as H.264 at 30fps or H.265 (HEVC) in 4K up to 60fps.

We note, finally, the possibility to make calls. Indeed, it is possible as easy as possible to make calls with and to a Fire TV Cube device, on the big screen therefore, in the same way as with a speaker. Amazon Echo. The experience is frankly nice, except that no webcam allows, for the moment, to make videoconferencing. Amazon recently raised the subject by promising very soon compatibility with certain peripherals on the market, which augurs well for a dedicated device as an option ... quality of our communications was excellent in our few tests and, according to our correspondents, was even better on an Echo 3 at equivalent distance. Very good point, especially as we already know, services such as Zoom should soon be available.

Finally, note that a few promising options seem about to arrive, notably support for satellite and wireless decoders (TNT). Unfortunately, we only had time to see a dedicated menu, the first update of the Fire TV Cube in French having overwritten it. Available on the American and Canadian versions, we are firmly awaiting this feature in France!

Our opinion on Fire TV Cube

After long years of waiting, it was a pleasure to finally welcome this device halfway between an enclosure Amazon Echo and a Fire TV Stick and like Amazon, we took our time to give you the most exhaustive possible feeling.

From a design point of view, the Fire TV Cube does not disappoint. Although it is quite sensitive to fingerprints, it is not a device that you will have to handle since it is intended for voice use or via its remote control. This point should therefore be put into perspective, especially as its compact design allows it to be discreetly integrated everywhere. It is a beautiful object and we particularly appreciated the small LED border that allows you to visualize the volume level or the activity of our favorite voice assistant.

On the hardware side, the Cube ofAmazon offers a very comfortable power which makes it much more pleasant to use than a Fire TV Stick or a Chromecast with Google TV. The navigation is very fluid, the content is launched at speed V and Alexa executes commands just as quickly. Its eight multidirectional microphones allow an excellent understanding of Fire TV voice commandseven far away and curled up in a sofa with a fairly high volume. Moreover, in the latter case, we noted that the Fire TV Cube was sometimes able to hear us while our two Echo Studio remained unmoved.

Regarding audio, the built-in speaker does not work miracles, but its role is not to play music and it is clearly not made to broadcast television sound, but dedicated to vocal feedback Alexa when using the Fire TV Cube to ask for the weather or possibly listen to the radio. This is not a problem since you will not even use it if you choose to combine it with Echo speakers or a Home Cinema system. And that is precisely its usefulness! Its dissemination bit stream makes it possible not to lose any of the sound qualities of the source and to increase up to 48 kHz in 16-bit on 8 channels, which will delight owners of a HiFi amplifier since it is the latter which will take care of the decoding of the stream. Ditto for the happy owners of a pair of Echo Studio, it is the integrated DAC which will decode the FLAC stream (compressed but not too much) and allow you to take full advantage of them. On the music side, the same is true and the Fire TV Cube is able to broadcast sound loss less, where a Fire TV Stick 4K is limited to 16-bit. If you have the right equipment, this time you will hear the difference!

Software level, although a bit confusing for now, note that a rComplete fire TV interface will take place by the end of the year. More refined, it will also be highly customizable, allowing you to choose the services for which you want to see the suggestions, but also to find your applications more easily. Amazon promises that the use ofAlexa It will always be more useful with recognition of the user's voice profile and adaptation of the content provided. We look forward to it.

In conclusion, we are going to answer the question you all ask yourself ... Is the price difference between a Fire TV Cube and a Fire TV Stick 4K justified?

Yes, it is, because of the hardware offered. More powerful it is logically more pleasant to use, does not suffer from slowness, and allows listening with a 24-bit uncompressed audio. In addition, it offers the possibility of Ethernet connection and D'use an external drive, which is sure to appeal to those who prefer to store their content rather than using streaming services.

In short, proposed at a price of 119.99 € except promo on Amazon.fr, the Fire TV Cube is clearly the ultimate streaming box for Alexa, a digest ofAmazon Echo and Fire TV united aroundAlexa. a must have for Les Alexiens who are not close to 60 €!
Discover Fire TV Cube, Hands-free with Alexa, 4K Ultra HD streaming media player 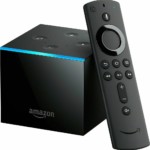 Available on Amazon. Fr
Tags Amazon Alexa Amazon Fire TV Streaming Box Fire TV Cube
Alexien Modo 19th October
Alexien Modo
More
Fascinated by Alexa since the day I received it in beta test, I gradually became passionate about the subject, before deciding to go further by creating a site with Jean-Christophe. An activity that allows me to quench my thirst for new technologies and share my discoveries about the nicest of communities: Les Alexiens.