Following our Aqara H1 EU test yesterday, wired switches do not require neutral wires, we had to tell you about their wireless counterparts: the Aqara Wireless Remote Switch H1.

More versatile, these ZigBee remote controls are essential accessories in a home automation system as they offer so many possibilities ...

Modern and elegant, the packaging is still as compact and high-quality. The brand's logo is of course included, accompanied by a visual of the product and the words " Aqara Wireless Remote Switch H1 Double Rocker" page (in French).

It is indeed the model to two buttons that we are testing today, Double Rocker in English. He will therefore be able to control multiple bulbs, but not only ... As the packaging specifies, this connected switch offers the possibility of setting single, double or long presses or even use both buttons simultaneously.

Should we speak of a wireless switch or a remote control? Well, as you wish, because the big advantage of this device is precisely that it can be used in several ways.

You can indeed use them as:

More angular, it is now perfectly flat, all in a still compact format of 8.58 x 8.6 cm for only 1.25 cm thick. This is the strength of the ZigBee protocol, here in version 3.0, which allows a power supply by a simple CR2450 battery.

To be honest, it's not really a revolution, but this new model is more pleasant to use. Its "click" is also more discreet than that of the previous model and its reduced stroke makes it faster, Aqara evoking a latency of only 50 ms. It also seems more solid to us, to do with time ...

Two LEDs, now on the front, discreetly testify to the operation of each of the buttons. They will also allow you to know when the switch will be in pairing mode when it is installed.

Two small notches are provided in order to easily open the back of the device using a flat screwdriver to change the battery. An operation that you will not have to do very often, however, Aqara promising 3 years of autonomy… This is 30% more than for previous models.

You will notice slots for screws. Indeed, although its weight of 77 grams allows you to fix it with the 3M adhesive supplied, you can also screw the device to the wall or to your flush-mounting box. 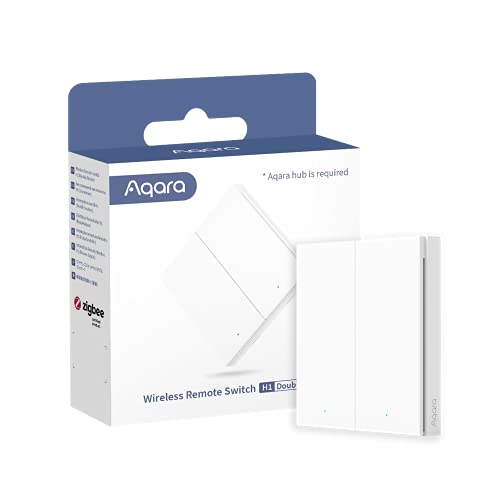 Aqara Wireless Remote Switch: much more than just a switch

In the case of a wireless switch, the installation of a Aqara Wireless Remote Switch is surprisingly easy.

Three possibilities are made available to you:

To use Aqara Home, you obviously need a ZigBee gateway such as the Aqara Hub M2, M1S or Aqara G2H camera.

TO READ :
Aqara Hub M1S test: the ZigBee 3.0 bridge that watches and alerts

As always, the installation takes place at speed V on the Aqara Home application.

Then you can obviously rename device et place it in a room. Everything is done with simplicity and speed ...

“At Aqara, installing rhymes with simplicity and speed! "

At Aqara, installing rhymes with simplicity and speed! We have indeed needed less than a minute to install this wireless ZigBee switch… This is one of the strengths of this protocol, in addition to its many automation possibilities: single, double or long presses on each button or even on both buttons simultaneously. Suffice to say that it leaves many possibilities ...

In summary, you can program:

So that makes seven possibilities, seven triggers for scenarios or actions on a bulb, a group of bulbs, or any device associated with Aqara Home ...

Combined with Aqara smart bulbs, you can:

And as always, you find a event log very comprehensive, as well as detailed reports on ZigBee link quality.

If you have a home automation box with a ZigBee gateway, it's even better because you can control any connected object with it. From your robot vacuum Roborock S7 to your fan Smartmi Standing Fan 3, through your Philips Hue bulbs, the limits are almost up to your imagination.

As an example, we have associated our Aqara Wireless Remote Switch H1 to our little box Homey Pro.

You can then create flows for many functions:

In the end, we therefore have 12 opportunities :

Then, it is obviously possible to control any device supported by Homey ...

Unfortunately, nothing is possible with our voice assistants yet. Unsurprisingly, Google Home and Alexa do not see this ZigBee switch. Cannot use it as a trigger in your routines.

Even with speakers equipped with a ZigBee hub, no salvation, but no doubt that this should change in the months to come with the Matter update on Amazon Echo.

Offering many possibilities with Aqara Home, it can be a simple connected switch, a coming and going if it is associated with a wired connected switch, or an interesting remote control with up to 12 functions assignable.

Sold around € 30 on Amazon. FrIs un must have for all those who have an Aqara gateway or for users of home automation boxes.

A perfect switch for back and forth!
View
Tags Aqara Aqara Home Aqara Wireless Remote Switch H1
Alexien Modo September 27, 2021
Alexien Modo
See more
Fascinated by Alexa since the day I received it in beta test, I gradually became passionate about the subject, before deciding to go further by creating a site with Jean-Christophe. An activity that allows me to quench my thirst for new technologies and share my discoveries about the nicest of communities: Les Alexiens.