Today, the Alexians will tackle a subject well known to connected people: Wi-Fi waves. Who has not heard: “But with all these connected objects, you have waves everywhere at home! This is not good ! " ? And go for his examples of popcorn that farts between 4 cell phones (and there, it is not Wi-Fi, but other waves) or other examples seen on the internet.

Before putting a sheet of aluminum on our heads, let's take a look at these warnings. Problems ? No problem ? Isn't it that simple?

Le Wi-Fi is a wireless communication protocol conforms to the standards of IEEE 802.11, the working group number 11 of a standardization committee of the IEEE (Institute of Electrical and Electronics Enginners), the 802, whose role was to work on wireless networks. And this is the explanation of the IEEE 802.11xx that you see everywhere when it comes to Wi-Fi. The xx is one or more letters giving information on the frequency used and therefore its speed.

Wi-Fi is easier to say and more seller than its code name, although Wireless Fidelity does not mean anything as such. The purpose of this committee was to set up and gain acceptance of recognized standards to allow different devices to communicate with each other wirelessly. It's a protocol.

The various connected devices will be able to communicate over a range of 20 to 50 meters by waves… radio! Yes, radio waves, that's all… Nothing very exotic!

Radio waves are short for "Radio waves" and have a maximum frequency of 300 GHz. A frequency? A frequency is the character of that which recurs at regular intervals. Imagine a rope making waves more or less close together. The closer the peaks of the waves, the higher the frequency; the further apart they are, the lower the frequency. 300 GHz, that means 300 billion vibrations per second.

Radio waves have wavelengths (a distance from the peak of the waves) of 33 km at 1 mm. The longer a wavelength (therefore the lower the frequency), the longer the communication distance is geographically long (with wavelengths of 100 to 10 km it is possible to communicate with submarines, while the Wi-Fi network is on wavelengths of 1 to 10 cm).

So "radio" waves are not sound waves (which are also waves, yes). If you think of the radio, it is the same system as the telephone or others: voice or information is transformed into binary data by the transmitter which is transmitted over long distances via radio waves and transcribed into sound waves by the receiver.

But the higher the frequency, so the shorter the wavelength, the more energetic the wave will be. Imagine a rope that you make waves with. If you want very tight waves, therefore with a high frequency, you will have to shake the rope very quickly, and therefore put a lot of energy into it. X-rays have a frequency of several million GHz.

To be completely clear, everything is just waves: visible light is a wave (and a particle, like all waves, but that's another story), X or gamma rays are also waves (very energetic capable of breaking the DNA of our cells).

But if everything is wave, is Wi-Fi dangerous ?

As we have just seen, some waves are dangerous, Everyone knows it. Indeed, the shorter the wavelength, therefore the higher the frequency, the more energetic our wave will be. And the more energetic they are, the more material they can pass through. The worst are gamma rays capable of passing through very thick shielding. X-rays and UV rays are not to be outdone… Everyone has their own action: gamma rays will break DNA strands, X-rays penetrate the human body without problem, UV rays alter surface tissues… And the consequences are known. There is no particular link between the frequency of the wave and its propagation distance. It is in this case the corpuscular aspect which comes into play. It is also what makes the difference between the ionizing waves (which will come to tear electro from the nuclei and are therefore dangerous) from the non-ionizing waves.

More the lower the frequency, the less impact the wave will have. Thus, there are no known cases of cancer due to infra sound that whales use to communicate. Ok, we can hear you from there: but microwaves are part of radio waves, at a frequency not so far from that of Wi-Fi!

Yes, it's true. There have been cases of Wi-Fi degrading when a microwave is in use. The two elements operate at almost identical frequencies (2,4 GHz) and if the microwave is not waterproof enough, waves of the same frequencies, carrying no information, disturb the network ...

But are we going to cook !? Houlà, calm down, you! No ! Microwaves heat food by causing water molecules to vibrate due to changes in polarity. And when the molecules stir, it heats up. But why doesn't Wi-Fi heat food? Because the microwave will bombard the food in an enclosure specially designed for this. The waves are concentrated there. This is not the case with Wi-Fi, where they are broadcast.

In addition, the concepts of energy and distance are important. The energy of a wave will decrease with distance. Thus, a microwave will develop waves with a power of 61 V / m (Volts per meter) in the enclosure and 3,1 V / m at 50 cm. And a cell phone will develop a maximum of 61 V / m at 1 cm and 4 V / m at 50 cm ... Your ear gets hot when you have the phone in your ear? This is normal, use the hands-free kit, compulsory in the packaging of new laptops in Europe. 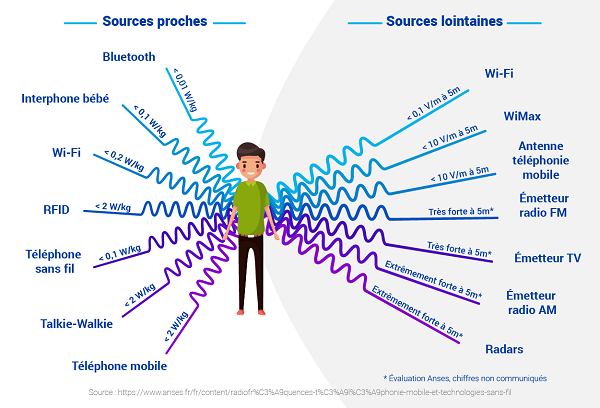 So the principle is to do not stick to the source that emits the wave because even if they are not very energetic, the waves are there at their maximum. This is also why the DAS was created. It's the Specific Absorption Rate and its purpose is to quantify the energy flow of a device producing waves, in particular for drinking water. The higher it is, the less good it is for us. Why cellphones? Because studies show that it is more of them than Wi-Fi that we should be wary of ... Indeed, the power of Wi-Fi waves is several times lower than that of mobile phones.

However, no study has shown a harmful short-term effect.. Several thousand studies point in this direction. On the other hand, no credible long-term study has not been made and that is what is missing.

And that is not to mention the symptoms of hypersensitivity to electromagnetic waves, recognized by the WHO. These symptoms are dizziness, headaches, nausea, fatigue, burns… when a person is in the presence of electromechanical waves. But the problem is that even if the WHO recognizes them, as well as the ANSES, neither of them manages to find a link between an environment invaded by waves and the symptoms… which moreover have no diagnostic criteria because they are based on self-declaration.

So finally, what we know is that we don't know. But good practices can still be implemented, such as not sleeping with your smartphone under the pillow, do not stay permanently glued to your Wi-Fi terminal or even put your head in the microwave ...
Tags Dangerous waves Wi-Fi dangers electromagnetic waves Wi-Fi
Jean-Christophe 22th October
Jean-Christophe
More
Did i choose Alexa or did she choose me? Let's say that as a beta tester, it's a bit of both! And I do not regret having met our favorite assistant nor this adventure undertaken with Alexien Modo. Technophile, self-taught and loving popularization, I try to make our common passion easy to access!