Today it is not a game skill Alexa that we are going to offer you, but a game for Google Assistant that should interest more than one: Questions for a champion. The famous game show has just landed for free on Android as well as on devices Google Home, allowing us to play alone or with others, just to kill time during this confinement!

To get started, nothing could be simpler, you just have to say: "OK Google, I want to play Questions for a champion". 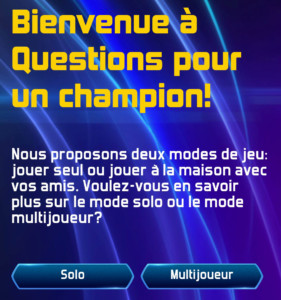 Before starting to answer the questions of the famous game show, the Assistant offers to create an account in order to register your points. If so, they will not be, you will understand.

If you want to know the rules, just ask Google for them and he is the host of the show, Samuel Stephen, who will explain them to you. The goal is simple: just reach 9 points, the winner being the one who obviously collects the most. A round consists of 5 questions: the first is worth 1 point, the second 2 points, the third 3 points, the fourth 4 points. In the event of a tie, the rule of sudden death will determine the winner by awarding him 1 additional point.

Note that you can also play on your smartAndroid phones and tablets. To do this, it is sufficient here also to ask the Assistant. The game will probably be less friendly with several people, but the result is also quite nice, especially since you can play with your friends ...

Questions for a champion is a fun game which allows you to have a good time thanks to Google Assistant, but we regretted having to deal with his voice still so not very fluid rather than that of Samuel Etienne, however used in the menus. Not very practical on a simple speaker such as Nest audio or Nest Mini, the game becomes more user-friendly around a Nest Hub or Nest Hub Max or even simply on an Android tablet. Last regret, and not the least, it is not possible to get the answer after a failure. In short, a nice game but unfinished.

Questions for a champion - France Télévisions 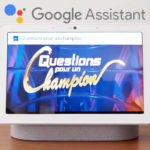 Available on Google Assistant
Tags Google Assistant Google Nest Google Home Games Nest audio Nest Hub Max
Vava Tc November 12, 2020
Vava Tc
See more
Simple user and novice fallen into the pot Alexa, this one fascinates me and thanks to the boys, Jean-Christophe and Alexien Modo, I learn a little more every day. Loving the different aspects ofAlexa, I turned to skills to share my discoveries with you.