Soundbars are on the rise. Bose has understood this and today unveils its new soundbar Angry Smart Soundbar 900, who besides being AirPlay 2 compatible, offers extensive voice control with Amazon Alexa, and in a lesser extent Google Assistant.

The American Hi-Fi specialist has just announced the opening of pre-orders for a new product which should delight more than one user ofAlexa : the Bose sound bar Smart Soundbar 900.

Compatible Dolby Atmos (but also Dolby Digital, Dolby TrueHD and Dolby Digital Plus), the new soundbar from Bose is equipped with 7 speakers and implements in-house technologies ADAPTiQ and PhaseGuide to adapt the diffusion of the sound to the configuration of the room.

Two loudspeakers placed towards the top are dedicated to the TrueSpace 3D spatialization. Bose explains that they allow "direct the sound rays in several directions, towards distinct spaces in your room". And, if that's not enough for you, note that it is possible to further improve this immersion by adding a subwoofer and wireless speakers in the back.

In addition to its Bluetooth/Wi-Fi connectivity and AirPlay 2 / Spotify Connect and Google Assistant compatibility, the new Angry Smart Soundbar 900 also benefits from a integration Alexa expanse thanks to the Voice4Video technology which allows direct control of a television or a cable or satellite decoder.

Thanks to the voice assistant ofAmazon, it is thus possible to turn a device on or off, pause or resume video playback, select a channel, launch your favorite applications, but also change sources. A possibility offered by the presence of an HDMI e-ARC connection. 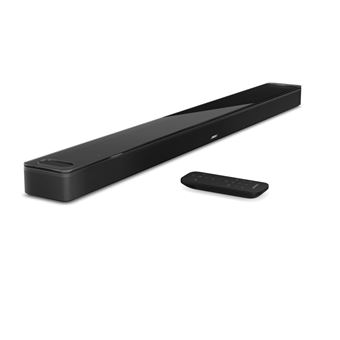 Angry Smart Soundbar 900 Black
€999,99
Shop now
Tidd.ly
Alexien Modo January 28 2022
Alexien Modo
More
Fascinated by Alexa since the day I received it in beta test, I gradually became passionate about the subject, before deciding to go further by creating a site with Jean-Christophe. An activity that allows me to quench my thirst for new technologies and share my discoveries about the nicest of communities: Les Alexiens.