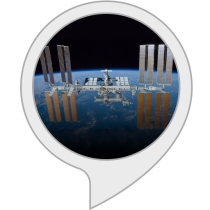 Alexiens, Alexiennes, this time it's your head in the clouds that we're taking you! Ready to board? No ? That's good, because we suggest you lift your head rather than lift yourself into the air.

After the visual skill "Space Shuttle" presented by Jean-Christophe last September, allowing you to go around the Earth as if you were aboard the shuttle, this time we offer you to have information on the International Space Station: the composition of the crew , a rather long summary of the previous day but and above all: the next 2 (up to 5) passages of the shuttle above you.

Respect the request toAlexa to get a response: " Alexa , ask Space Station when is the next passage over (Paris for example) ”.

NB: it is necessary to indicate the name of a sufficiently important city, so that it is recognized. You also have the option of receiving an alert 5 minutes before the passage so as not to miss it. Well, believe me, the alert works perfectly at 5:10 am on my spot!

Good observation the Alexiens and Alexiennes, hoping that the weather is favorable.

Note: 3 out of 5 (the wording must be respected to know when the next observation will be, otherwise it is the composition of the crew that is given).

Activate the skill on Amazon. Fr

Tags Alexa Amazon Alexa Amazon Echo skill Skill Echo Spot Show cv Space station
Vava Tc March 11, 2019
Vava Tc
More
Simple user and novice fallen into the pot Alexa, this one fascinates me and thanks to the boys, Jean-Christophe and Alexien Modo, I learn a little more every day. Loving the different aspects ofAlexa, I turned to skills to share my discoveries with you.